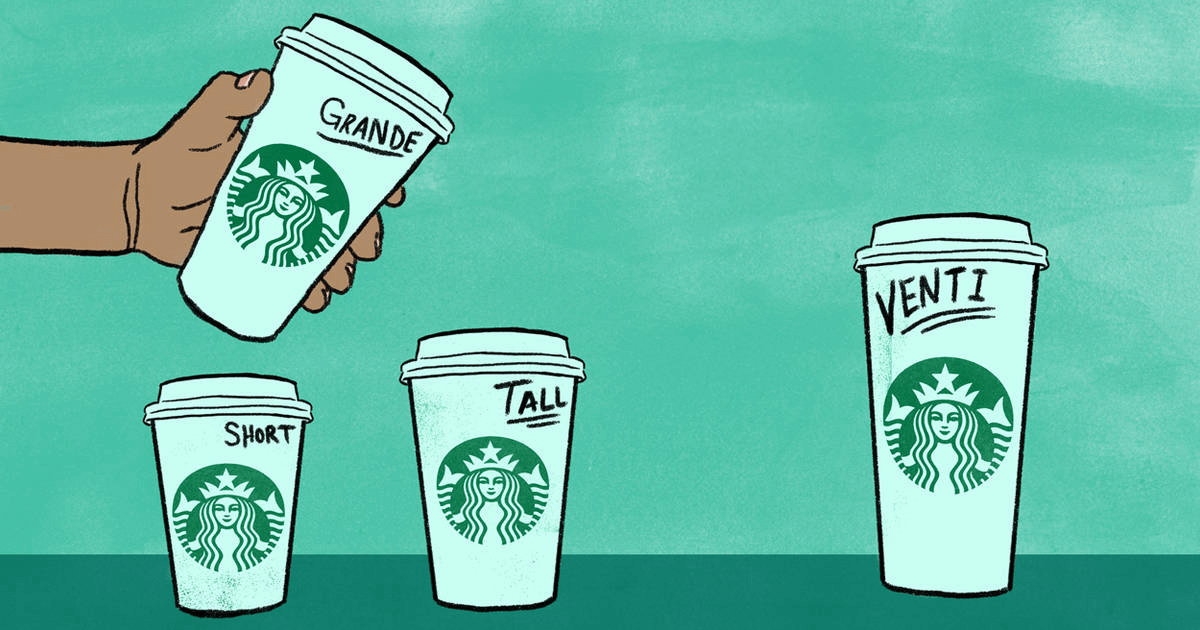 Starbucks labels its cup sizes differently than many other coffee shops, and many people wonder why. So, let’s look at what Starbucks cup sizes mean and what they’re called!

Starbucks has a variety of cup sizes different from other coffee restaurants. From smallest to largest, the cup sizes at Starbucks are Demi, Short, Tall, Grande, Venti, and Trenta.

Did you notice the Italian names? I also asked myself why Starbucks chose to use Italian names on their cup sizes and many other drinks until I sought out. You’ll only see three cup sizes on Starbucks menus — tall, grande, and venti cup. The short cups are usually only available for Starbucks hot drinks, while Starbucks avails the Trenta cups only for select iced beverages. Why and what Starbucks sizes mean is why I did my research, and I’m ready to share them in this article. Let’s dive in and find out.

Let’s discuss these cup sizes in detail below!

This is the smallest Starbucks cup used for espresso shots. It’s made solely for espresso shots and holds 3 ounces. A Demi can hold single or double shots and nothing else. Why? A double espresso shot has two ounces, which means a Demi cup doesn’t leave much space for anything else. Wondering what the word Demi means? Well, it is the short form of the French word “demitasse,” loosely translated as half-cup. The history of Starbucks Demi cup size goes back to Italy and Italian coffee shops in 1906! I should also tell you that Starbucks never lists Demi on its menu, and not many locations serve it. So, when you order a Demi shot, you may be served in a short cup.

The Starbucks shot cup is one of its original or pioneer cup sizes and contains 6-8 ounces. This little cup is only available for hot drinks, including the Starbucks espresso shots and brewed coffee. Interestingly Starbucks never lists the Short cup on its menus, which is unknown to many people. Also, many people know that short Starbucks cups are for children or smaller-sized beverages, so they are not ordered in many cases. You may also benefit from knowing that, like the Demi, the Sort cup holds a single or double shot of espresso and nothing else.

Although confusing, Tall is the smallest cup size on the regular Starbucks Menu holding 12 ounces. It’s around 50% larger than Starbucks’ short cup and available for both cold and hot drinks and beverages. Why’s it called a Tall? Well, it used to be the tallest Starbucks largest size cup on the menu but was unseated by the Venti. Naturally, Tall espresso drinks have single espresso shots unless you order a specific shot. So, they’re naturally the same caffeine content as a short cup but with more extra milk. But if you’re a strong coffee lover like me, you probably already know that some Starbucks drinks like the Americano and flat white have an extra shot of espresso. This means that a tall Americano has two espresso shots.

Currently, the Grande is the ‘medium-sized’ Starbucks cup, although it used to be the largest cup before the Venti was introduced. It was probably called Grande, which means ‘big’ in Italian. And it’s probably Starbucks’ most popular cup. Starbucks cups have Italian names, so this shouldn’t be a surprise. The Grande holds 16 ounces and two espresso shots and comes in both cold and hot options for your drinks and beverages. If you order a Grande, you’ll be taking around two and a half cups (six-ounce) of coffee. But Americanos and flat whites have three espresso shots, so you might consume 3 cups of coffee. You’ll also notice that you can only get some Starbucks menu items in the Grande-size cups, like smoothies.

The venti cup is confusing because it comes in two different sizes. Starbucks separates the caffeine content in a hot venti and a cold venti. So when you order a venti, you must be very specific if you want a hot or cold. Why?

A hot venti has 20 ounces of coffee. It must surprise you that the word Venti actually means 20 in Italian, so a Venti is 20 ounces of coffee in Italian. A venti hot is Starbucks’ largest cup of hot coffee and has two espresso shots unless you ask the barista to add an extra shot. There’s no other hot coffee drink other than a Venti. But your Venti will have more flavored syrup and milk syrup than a Grande.

A cold venti is 24 ounces, which is slightly larger than a hot venti, probably to add more room for ice. Also, a cold venti has 3 espresso shots, making it a little stronger than a cold one. Starbucks Ventis is the largest cup size for iced espresso drinks at Starbucks.

You never hear about a Trenta a lot because it’s not a regular on the Starbucks menu. It’s also the newest Starbucks cup size entry released just in 2011. At 31-ounce coffee, a Trenta is actually much larger than a normal human stomach. Starbucks offers Trenta cups only for its cold beverages such as Iced coffee, shaken iced tea, cold brew, shaken iced tea lemonade, and the Refreshers.

Which Cup Size Should You Choose? 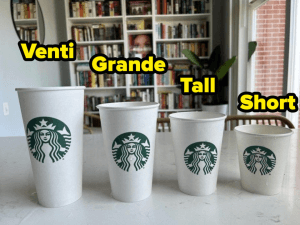 It’s recommended to take up to 400 mg of caffeine for healthy adults. This is roughly four cups of brewed coffee. That’s two Tall cups. So, it appears a tall cup is okay to take unless you want extras so that you can take grande, Venti, or Trenta. But I understand the complexity of choosing coffee to have. I wouldn’t possibly know which cup size you should choose, but I only give you an idea. It depends on the strength of coffee you want, the warmth (hot or cold), milk, and how long you want to enjoy the drink.

Starbucks cup sizes are different and sometimes confusing to many people. With sizes like Demi, short, tall, grande, Venti, and trenta, any person new to Starbucks won’t easily tell how to order and how much they’ll actually get. If you want extra shots of espresso, you have to specify to the barista.

What Language are Starbucks Cup Sizes?

What is the Most Popular Starbucks Cup Size?

Grande. The Grande cup with 2 1/2 coffee cups, Starbucks’ medium-sized’, which means ‘big’ in Italian, is its most popular cup. People don’t like small things; most people can’t finish tall. So they order Grande.

How do you Know your Cup Size at Starbucks?

Ordinary Starbucks cup sizes are on the standard menu. If you don’t know, you can ask the barista.

A Trenta Cold, at 31 ounces, is the biggest Starbucks cup size.