Do you want the energizing effect of caffeine without the taste of coffee? Try these best Starbucks caffeinated teas.

There is one this a colleague in our office despises the most, and that is coffee. Everything from the smell to what she describes as the most bitter taste. So, when we asked her where she gets her morning caffeine boost each day, we were surprised to hear that it was from the caffeinated teas at Starbucks. Based on her information, we decided to dig a little deeper and realized that some Starbucks teas are almost as highly caffeinated as a regular cup of Starbucks brewed coffee. So, if you’ve been looking for a caffein substitute for coffee, look no further. In this list, we will share with you the most caffeinated teas offered at Starbucks.

How Much Caffeine Does Starbucks Tea Have?

How To Order Caffeinated Tea At Starbucks?

Most of these teas are on the menu, so ordering them is easy. You just need to know which ones have caffeine and which ones don’t. If you are unsure about this, you can ask the barista while ordering. You would also need to specify the size of the tea and any customizations you would like. Ways you can customize your tea is by choosing to add a sweetener or opting out of it. You could also ask for the tea to be served over ice or as a Frappuccino. The choice is yours.

How We Choose The Best Tea With Caffeine At Starbucks

So, what makes this list of Starbucks teas the best ones with caffeine? Well, while picking out the tea options on this link we were looking at the following factors:

3 Best Tea With Caffeine At Starbucks.

When you are looking for a highly caffeinated tea at Starbucks, this will be the best recommendation. While the actual hot brewed chai tea made from Teavana Chai tea bags, has 40mg of caffeine in a grande size, the Chai tea latte contains 95 mg in a grande size, 120mg in Venti size. The reason for this is because the latte version, and every other version of Chai tea at Starbucks, use a chai concentrate instead of the tea bag, which seemingly has more caffeine content and is sweeter.

We enjoy the concentrate-based drinks more given their infusion of black tea and various spices like ginger, cardamom, and cinnamon, resulting in the perfect balance of sweet and spicy. You can have this delicious drink in many ways. You can serve it over ice as an Iced Chai tea latte (95mg) or add pumpkin spice syrup and make it a pumpkin spice chai tea latte (70mg). If you want a less caffeinated version you can have can enjoy it as a Frappuccino, just order the Chai Crème Frappuccino (40mg). These options are on the official Starbucks menu and they just scratch the surface. Play around with the syrups, milk options, and other ingredients to customize your perfect chai tea drink.

Another great option for a good caffeine boost is the Matcha Green Tea latte, sometimes referred to as simply Matcha tea latte. In grande size, the caffeine content is almost as much as a Chai tea latte, with about 80mg. If you have a venti size then that is about 110mg of caffeine. This drink and all its variations are based on the special sweetened Matcha powder mix, which we are obsessed about. The powder is a combination of sugar and special Japanese green tea. If you don’t have a sweet tooth, then you may be out of luck because there is no sugar-free option for this mix.

But there are various ways to enjoy this drink regardless, depending on what you are in the mood for. For a cool refreshing option, you can have the latte served over ice as an Iced Matcha green tea latte (80 mg). Alternatively, you could reduce a bit of the caffeine and sweetness by having it as a Matcha Green Tea Crème Frappuccino (70mg). You can also always drop the latte and opt for a tangier twist with the Matcha green tea lemonade which also has 80mg of caffeine.

If you ask us, this is the perfect option for an afternoon cup of tea. A grande size contains 40mg of caffeine which isn’t as high as the first two. But it is still strong enough to give you the energy boost needed to get out of an afternoon slump. It’s also great for you if you aren’t looking for that much caffeine or if you are trying to moderate your intake. The latte is made with a strongly brewed Earl Grey tea, which is why some people alternate between the two names.

The earl grey tea is one of the most recognized flavored teas, made up of tea leaves blended and flavored by the oil extract of Bergamot oranges, which gives it the unique citrusy and chocolatey notes we love so much. Like the rest, of the tea lattes mentioned here, you can have this served over ice as an Iced London Fog tea latte (40mg). You can also customize the tea to your taste by adding your preferred sweeteners and flavors. The most recommended is honey.

What tea has the most caffeine at Starbucks?

The most caffeinated tea at Starbucks is the Chai Tea Latte with caffeine content ranging from 50mg short size, 70mg tall, 95mg grande, and 120mg Venti.

Which Starbucks iced tea has the most caffeine?

The Iced Chai Tea Latte is the most caffeinated iced tea at Starbucks with caffeine content ranging from 70mg tall size, 95mg grande, and 120mg Venti. 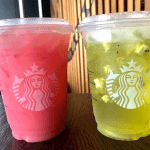 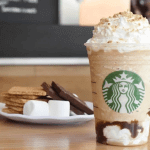