When Starbucks introduced their reusable cups, they never thought they would become so popular to the point of being collectable items. But why are Starbucks cups so popular?

The Starbucks cups are so popular because they are uniquely designed, rare and can be used as presents for birthdays and such functions. When I first saw the Starbucks mugs in 2018, I never thought I would be obsessed with collecting them. I never imagined I would have to pay up to $300 to get a mug. I first placed several of the studded, matte black Cold Cups on my bookshelf. The more I saw them there, the more I wanted to get. I was amazed to realize that my sister also had several Starbucks cups on her décor shelf. Soon we began to compete on who had the best and biggest collection. I have a history of collecting Starbucks cups, and in this post, you will learn why the Starbucks cups are so popular and why Starbucks cups, mugs, and tumblers have become collectables.

Why are people obsessed with Starbucks cups and tumblers?

There are several reasons why people are obsessed with Starbucks cups and tumblers, including their design, the fact that they are rare, the possibility of using them as gifts and the general hype propagated through social media. Before 2019, Starbucks had been struggling to produce the best designs of reusable holiday cups. One of the challenges they encountered was that they were accused of producing cups that are so much into Christmas celebrations, ignoring those who do not celebrate the holiday. Therefore, they scrapped their holiday cups and replaced them with all red ones. The replacement left some Starbucks fans wishing they had preserved the previous well-designed cups. Therefore, when Starbucks brought back fancy cup designs, Starbucks fans started to collect them to preserve them in case they are faced out again.

Additionally, the cups became rare and getting them became heroic. If you posted an extensive collection, you became a hero on social media, especially among those who collected the cup. Moreover, the cups were not abundantly available; hence, if you were lucky to get them, you had to hoard them. Finally, social media created a major hype around the hype; hence, most teens wanted to join the wagon.

What is the fascination with Starbucks cups?

There are two reasons for the fascination with Starbucks cups. First, having a Starbucks reusable cup guarantees you a 10-cent discount for each drink you purchase. Secondly, there is significant hype on social media around the collection of Starbucks cups. When Starbucks announced the availability of reusable cups, its primary goal was to care for the environment by avoiding pollution caused by plastic production and littering after using disposable cups. The reusable cups attracted customers because they would save when purchasing drinks from Starbucks but also because the cups looked beautiful and stylish.

The main reason is that the cups make them heroic on social media. After several millennials posted their Starbucks cup collection, they caused a great hype because not many people had access to the cups. Like collecting cars makes a person heroic, teens and those in their early twenties were perceived as heroic on social media depending on their collection. Therefore, the millennials loved to collect Starbucks cups because of the comments and the likes they would get on social media. Secondly, a group of teens decided to use the cups as gifts. Due to the incredible hype that was created, around the cups, gifting a person a Starbucks cup was a big deal.

Why are Starbucks cups so expensive?

The cups have become so expensive because they are rare due to many cup collectors. Collectors buy cups from various locations and make them rare. Some eventually start selling their collection and overprice it because their primary target is other collectors. So the law of demand and supply has played a significant role in determining the prices of the cups among the collectors. The cups are also expensive in the Starbucks store, and this could be because of the production cost. The cups are meant to serve a customer for an extended period and therefore have been designed to be of high quality, increasing the production cost.

What are the Most sought-after Starbucks tumblers?

What is the point of buying a Starbucks cup?

A Starbucks cup guarantees you a 10-cent discount when you purchase a drink from Starbucks.

Are Starbucks cups worth it?

Yes, the Starbucks cups are worth it. You can get a discount and social media recognition if you have an extensive collection. 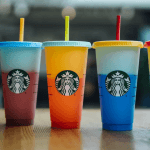 When does Starbucks restock cups? (Where can I find Starbucks cups I stock? + More Information)