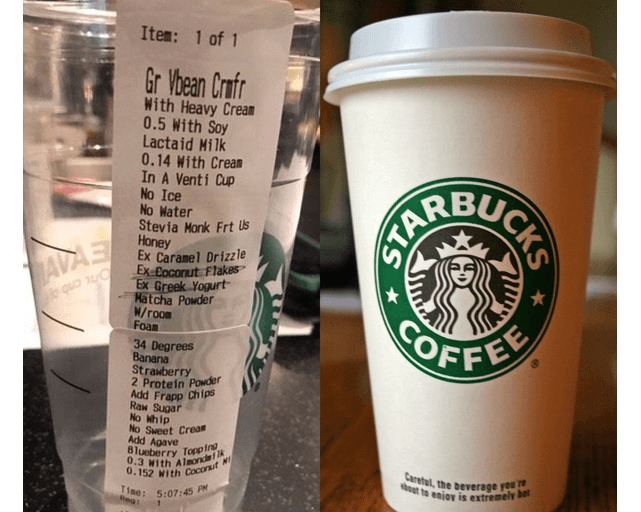 It is not uncommon to see Starbucks fans place absurd orders and display them on TikTok. As a result, there are all kinds of orders on the internet, so what is the longest Starbucks order?

The longest Starbucks order is a Venti Caramel Crunch Frappuccino with extra pumps of dark caramel sauce, bananas, whipped cream, extra ice, honey blend, and caramel drizzle. There are many ridiculous orders online made just for the sake of making a long beverage. However, I found this to be a genuine order as the person who placed it just wanted to enjoy his drink without a show. In this post, we’ll unpack what this order is about, its nutritional information, how to make it at home, and more.

What is in the longest Starbucks order?

It is a Venti Caramel Crunch Frappuccino customized with 13 ingredients, which include heavy cream, seven pumps of dark caramel sauce, seven frappuccino chips, five pumps of frappuccino roasted coffee, extra salted brown butter, five bananas, extra ice, a pump of the honey blend, extra caramel crunch, extra cinnamon dolce sprinkling, extra whipped cream, and extra caramel drizzle. This drink was christened the “Edward” for the customer whose long order went viral after the barista posted an image of the cup on Twitter as a joke about its over-the-top contents.

This order caused an uproar online, with people taking sides as they debated the merits of Starbucks’ policy of letting their customers order various kinds of drinks. Baristas – both current and former – and allies went on the offensive, pleading with customers to end the TikTok order trend because it puts a lot of stress on baristas, who need to please all customers, including those held up in line by the one customer ordering an intricate drink.

However, Starbucks management defended its customers’ right to request whatever customized drink they wanted, saying it was its duty to help customers find and craft beverages of their choice. Furthermore, management stated that this was and always will be at the heart of the Starbucks experience.

There are many long Starbucks orders online, especially on TikTok and Youtube, and there seems to be no let-up by Starbucks fans as they develop new ones every day. A number are genuine, with people taking advantage of Starbucks’ offer to craft drinks that they enjoy. Some are just for show, to try and beat the last longest order on record. None has so far gained as much attention as “The Edward.”

Since Starbucks intends to keep customizations open, you can take advantage and modify your drink in whatever way you like, but remember to be polite and kind to the person making it.

What is the nutritional information of what is the longest Starbucks order? 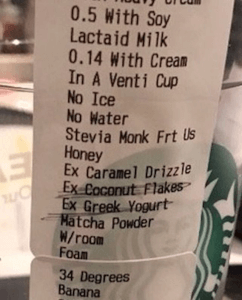 This customized Venti caramel crunch frappuccino will serve more than 1,030 calories, 170 grams of carbs, 100 grams of sugar, 75 mg of cholesterol, and 9 grams of protein. Based on a 2,000-calorie daily intake diet, if you want to order this customized frappuccino, be ready to reckon with more than 200% of your daily sugar and 130% of your daily fat intake. By comparison, a standard venti caramel crunch frappuccino without customization will give you 570 calories. This includes 210 calories from the 15 grams of fat. It will also have 75 mg of cholesterol and is high in carbohydrates, with 84 grams, which represents 31% of the recommended daily intake. The problem with these carbs is that they are mainly from the 78 grams of sugar, which represents 156% of the recommended daily intake.

Depending on how the barista mixes it, this customized version of the Caramel Crunch Frappuccino will exceed every single measure in the standard Venti cup. By having extra whipped cream, the amount of fat will go up by 4 grams, adding 40 calories to the drink. The extra honey pump will add 28 calories and 7 grams of carbs. Each pump of dark caramel sauce adds 50 calories and 13 grams of sugar to the standard menu frappuccino, but this drink only adds one pump to the standard menu frappuccino. Each banana weighing 37.5 grams has 75 calories, 16 grams of carbs, 1 gram of fat, and 2 grams of protein.

Can you make Starbucks’s longest order at home?

Yes, you can make a drink inspired by this customized caramel crunch frappuccino at home, although it will not be an exact copy. You’ll need a blender and ingredients, which are readily available at Starbucks and local stores. The ingredients are:

To make this drink, first, blend the bananas, then add the vanilla ice cream, coffee, ice, and caramel sauce in a blender. Blend until completely smooth. Top with whipped cream and serve.

The internet is awash with long and absurd orders made by Starbucks fans. A number of them are made for the sole purpose of trying to make the longest order. I find the customized caramel crunch frappuccino discussed here most deserving of the title of the longest order as it is long and known to more people in the US and internationally. I also like that it was a drink that someone took and enjoyed, and its fame was quite unintentional on his part.

What is the most confusing Starbucks order?

One of the most confusing orders ever placed reads, “Non–fat, upside-down, extra hot caramel macchiato.” There seems to be no obvious reason why the upside-down is included.

What is the hardest thing to get at Starbucks?

A well-made non-dairy milk Flat White drink can be the hardest thing to get at Starbucks simply because some baristas find it hard to make. The milk is to blame for the problem it causes. Poor milk-steaming or pouring can ruin the look.

What is the most complicated coffee order?

The most confusing order is the Venti cup, iced, 10 shots of ristretto with breve, 7 pumps of caramel syrup, 5 pumps of vanilla syrup, and 4 Splenda, poured, not shaken. The reason it is complicated is that it has precise steps and a requirement not to be shaken.

1 thought on “What is the longest Starbucks order? (Can you make it at home, what is its nutrition information + more FAQs)”