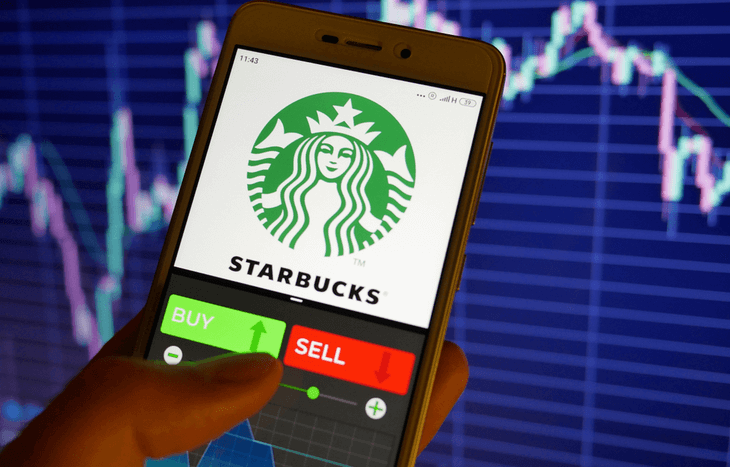 Your daily Starbucks coffee can taste even better if you own stocks in this giant coffee shop. So, what is Starbucks trading at? Read on to find out.

As of September 19th, 2022, a Starbucks share traded at $92.14, but the price will change due to fluctuations in financial markets. If you’re looking for your next investment opportunity, Starbucks stocks are a great start.

Recently, my financial coach advised me to invest in several companies, but Starbucks stood out. Despite some ups and downs in the stock market, my Starbucks returns are consistently good so far. I now binge on my fave Starbucks treats guilt-free because I make money as I spend some! If you love Starbucks as much as I do, you can invest in it after thorough research. That way, you can have your fave Starbucks cake and eat it too! You can get your research started with this article. Keep reading.

Is Starbucks A Publicly Traded Company?

After 21 years of outstanding success as a private coffee shop, Starbucks went public and joined the US stock market on June 26, 1992. Initially, the company only offered stocks to eligible employees for a year before it issued an initial public offering of 2.1 million shares on Nasdaq as SBUX. According to financial experts, the move was a turning point for the company because it raised $29 million for more operations and changed its growth trajectory for good.

What Is Starbucks Worth?

According to Forbes, as of September 2022, Starbucks is worth 105.72 billion dollars. This figure includes $30.4B in revenue, $28.8B in assets, and $4.4B in profits. Such a market cap is a sign of a company’s stability and maturity in business that guarantees a stock investor the best dividends.

What Kind Of Growth Will Starbucks Generate?

On September 13, 2022, Starbucks unveiled a growth strategy called the Reinvention Plan during its biennial Investor Day event. In the next three years, Starbucks is banking on its customers, partners, stores, and tech to spur growth. The plan seeks to increase Starbucks stores worldwide, speed up operations through automation, expand its loyalty program, and introduce new coffee-making equipment. Since the Starbucks app gained popularity when COVID-19 changed consumer behavior, the company will leverage that too.

The above changes will hopefully yield 15% to 20% of profits per share as the world continuously adjusts to life with COVID-19. Starbucks will return $20B to investors through share buybacks and dividends if its 10% to 12% revenue growth projections pan out. These numbers represent a significant improvement from the company’s 8% to 10% range of growth in prior years. By 2030, the coffee shop will also expand to 50,000 stores globally, with an initial focus on China, as its staff enjoys better pay in response to concerns about poor working conditions.

Is Sbux A Good Stock To Buy Now As An Investor?

Given the 2022 Starbucks growth strategy, its stocks are an excellent idea, especially for investors who want a stake for the long haul. Starbucks’ valuation is considerably lower than other US food companies like McDonald’s, so experts argue it’s an ideal time to buy its stocks. It’s a fluke because stocks in such large companies rarely fall enough to such low yet attractive prices.

If you’re a new investor, buy now. You can earn as much as 41 cents as dividends per share every quarter. Wall Street analysts also predict SBUX stocks will grow steadily in price over the next twelve months. You can sell your stake later at a profit. Use a stock broker or a Direct Stock Purchase Plan to buy Starbucks stocks.

The fall in Starbucks stock price is only bad news if you want to sell your stake, but you can buy more stocks to boost your holdings in the company. It’s crucial to note that this is a forecast, so you should do due diligence and make informed decisions before you buy into any company.

What was Starbucks’ initial stock price?

What was Starbucks’ highest stock price ever?

On July 26, 2021, Starbucks recorded its highest price for a share at $126.10, but the bliss was short-lived as it grappled with the impact of the COVID-19 pandemic on its operations and its staff’s plan to unionize.

Who owns the most Starbucks stock?

The Vanguard Group, Inc., an investment consultancy firm, owns the most shares at Starbucks at an 8.52% stake with an estimated value of $8.2B. On the other hand, Howard Schultz, the founder of Starbucks, is the only individual who owns the highest number of shares in the company at 2.9%, worth $2.3B.