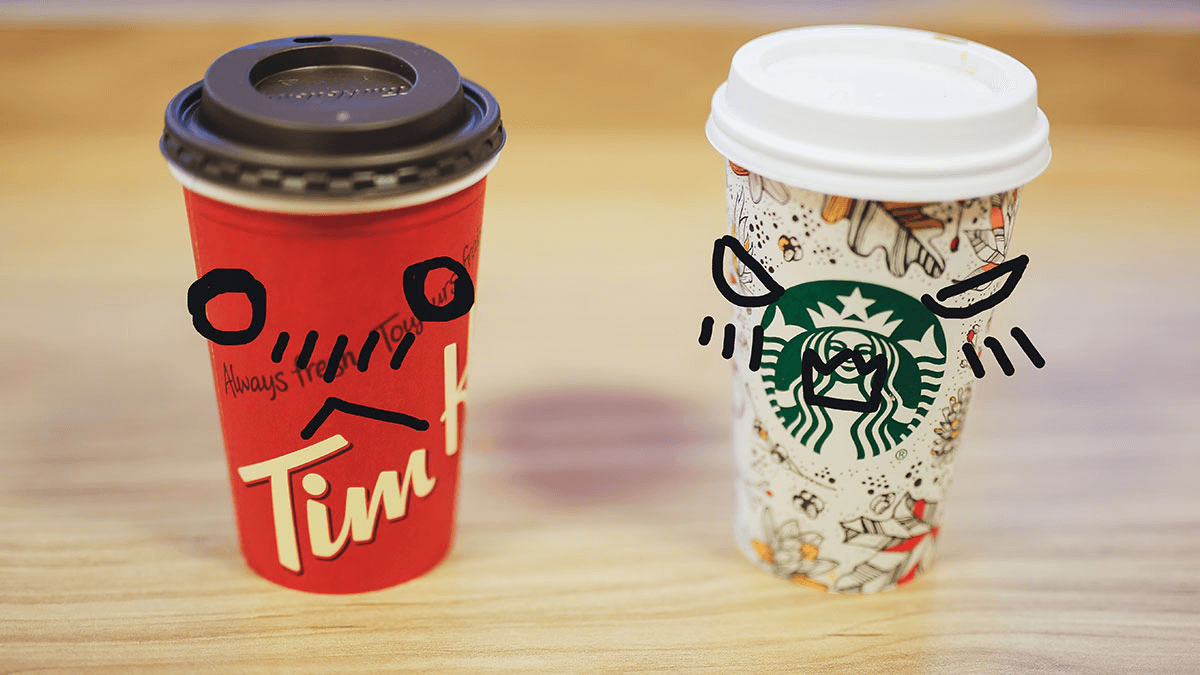 A quality cup of coffee can make you start your day well and feel more energetic. Though many people depend on this beverage, some are torn between getting coffee from Starbucks and Tim Hortons.

Working indoors comes with unique challenges. Sometimes, I find myself visiting a coffee shop just for interaction. Though I have to pay more for Starbucks drinks, this store is my favorite. I created this post to help you find out which of the two companies has better coffee. You will learn the crucial aspects of both companies. Read on!

What are the differences between Tim Hortons vs. Starbucks?

Tim Hortons Vs. Starbucks: How do they compare?

Starbucks prioritizes making every customer feel at home. You will likely enjoy Starbucks’s ambience since it features earthy colors, a warm glow of the lighting, artwork on the walls, and seating that promotes interaction.

On the other hand, Tim Hortons maintains the standard restaurant style. Unlike Starbucks, this coffee house is mainly designed for small groups. The interior of Tim Hortons has bright lighting, and it seems like a place to simply eat and go.

Starbucks, therefore, wins in this category due to its more welcoming atmosphere.

Starbucks has over 33,800 locations in more than 80 countries. Its aim is to gain more access to bigger markets. This company continues expanding its business internationally. Starbucks stores in different countries have their own practices.

Though Tim Hortons has been in business for longer, it only has 4,846 locations and operates in 14 countries. This company plans to extend its dominance in Canada and open more restaurants in more countries.

Starbucks is a better choice in this category since it has more locations in numerous countries.

Starbucks is famous for its wide variety of specialty drinks and secret menu. You can buy all kinds of drinks from this store, such as hot and iced coffees, hot tea, refreshers, lattes, cappuccinos, smoothies, juices, and frappuccinos. It also serves seasonal drinks during holidays for more unique experiences. Many Starbucks customers are also impressed with its culture of writing their names on the cups.

Apart from picking the drinks available, it allows you to personalize them according to your taste since it offers different kinds of flavors. You can also explore the food items available on the Starbucks menu. This company sells pastries and sandwiches that you can buy alongside your favorite drinks. The problem with Starbucks is that it has limited options when it comes to food items.

On the other hand, Tim Hortons classifies its beverage menu into two categories: cold and hot drinks. Some of the beverages you will come across on the menu include coffee, hot chocolate, Latte, and cappuccino. Like Starbucks, it also offers some seasonal drinks and flavored syrups.

Note that Tim Hortons has fewer flavored syrups compared to Starbucks. This makes it hard to customize some of the drinks. While Tim Hortons adds flavor to drinks to increase their taste, Starbucks makes beverages precisely the way customers want them.

Tim Hortons also has bakery items that you can consume if you are hungry. Some of them include croissants, muffins, donuts, bagels, sandwiches, cookies, wraps, and poutine. The problem with this company is that it has limited options for people with precise dietary needs.

Though Tim Hortons has a wide variety of food items, Starbucks is the better choice in this category since it has numerous beverages and more customization options and accommodates people with specific dietary needs.

Tim Hortons pays farmers that sell most of their products at low prices. On the other hand, Starbucks is keen on paying farmers the correct amounts for the products they supply to their stores. Creating a great relationship with farmers is one of the things that has made Starbucks stand out among other companies such as Tim Hortons.

Tim Hortons wins in this category since it has cheaper products.

Starbucks allows you to choose different size options when ordering its beverages. The sizes available at this coffee house include a tall (12 ounces), trenta (31 ounces), venti (24 ounces), and grande (16 ounces). You may also come across kid-friendly beverages that can be served in a short cup (8 ounces).

Tim Hortons also allows customers to order beverages in different cup sizes. The smallest cup size is 8 ounces, followed by the 10-ounce cup size. You can also order a drink in a large cup of 20 ounces or in an extra-large cup of 24 ounces.

Though some of the beverage sizes are similar in both companies, Starbucks wins in this category since it offers bigger sizes. For instance, it has a grande cup of 16 ounces, and its largest cup is 31 ounces.

Starbucks performs different tasks to protect the environment from different harmful materials. For instance, it established a waste reduction program to recycle items. It also installed a dishwasher to minimize water usage. This company even utilizes wood products and recycling tiles in their stores.

On the other hand, Tim Hortons has eco-friendly packing designs and green building designs. It is also keen on minimizing through recycling and reusing. This company tries to reduce water consumption at its stores.

Since both companies have been implementing different environmental sustainability activities, they draw in this category.

This company has been selling coffee and food items since 1964. Jim Charade and Tim Horton were the founders of this company, and they were first established in Hamilton, Ontario. Ron Joyce became this company’s sole owner after Tim Horton’s death in 1974.

By 2002, this company had become Canada’s most popular fast food chain. It slowly expanded to other nations and became quite successful in the United States. You can find numerous Tim Hortons shops in New York and other cities in America.

Today, Tim Hortons operates in 14 countries and has over 4000 stores. The company specializes in selling blend coffees, Timbits, Doughnuts, and Double-Double coffees. This coffee shop nowadays sells all meals to customers. Did you know that this company sells up to 5 million cups of coffee in a day? Research shows that almost each Canadian stops by Tim Hortons at least once a month for a cup of coffee or a baked item.

Starbucks opened its gates to customers in 1971 in Seattle. Jerry Baldwin, Zev Siegl, and Gordon Bowker were the founders of this company. Did you know that Starbucks started as a coffee bean company? When it was established, it offered customers tea, spices, and freshly roasted coffee beans.

It was not until 1987 that the company officially became a coffeehouse after selling it to Howard Schultz. Though Starbucks was established a few years after Tim Hortons, it has managed to become a pioneer in the coffee-making industry. As the company expanded, it started purchasing different coffee retailers and selling specialty beverages. This coffee house now has over 33,800 locations in over 80 countries.

Starbucks specializes in selling coffee. It also sells baked items and collectibles like cups, flasks, and mugs. This company is not only popular for its countless drink options but also for its authentic coffee experience. Many people love it since it accommodates individuals on different diets.

Final Verdict: So, Which is better? Tim Hortons or Starbucks?

Starbucks is better than Tim Hortons. Though this coffee house is more expensive, it is better since it offers high-quality beverages, has a wider range of beverage options, offers a more welcoming atmosphere, and is easy to access since it has stores in numerous places.

This coffee house also has the edge over Tim Hortons since it caters to the needs of everyone, including those on specific diets, and allows you to personalize drinks due to the numerous customization options available. Though Tim Hortons has cost-effective beverages, you can get more value for your money by being a Starbucks customer.

No. Starbucks is more popular than Tim Hortons since it has many unique features such as quality drinks, free wifi, and free samples to customers.

Who is more profitable between Starbucks and Tim Hortons?

Starbucks is more profitable than Tim Hortons. Since this coffee house offers a better experience, many people are more willing to pay for its products leading to greater profits.

No. Research shows that Starbucks and Tim Hortons have nearly identical caffeine contents in most beverages.

1 thought on “Tim Hortons vs. Starbucks: who has better coffee?”